Added to wishlistRemoved from wishlist 0
Add to compare

Wild Card Games Who Knows Where? – The Global Location Guessing Family Board Game

The Social Store Who Knows Me Better? NSFW Edition | Hilarious Party Game | Would You Rather? 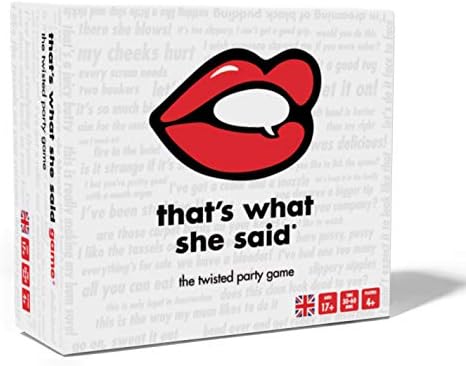 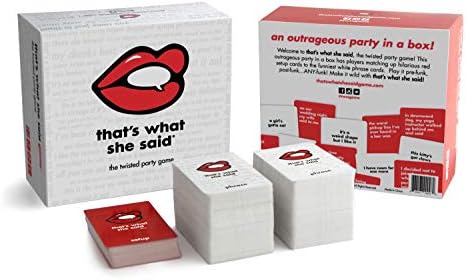 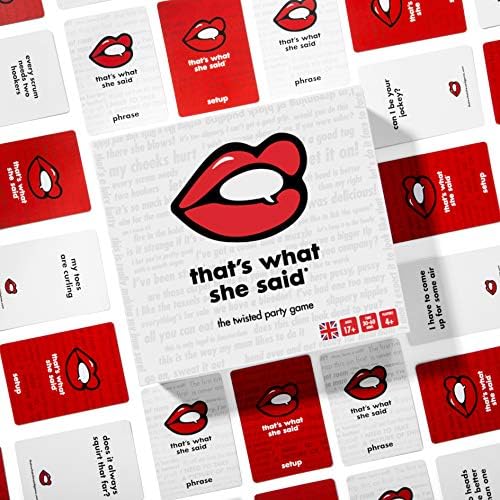 We all say it. Now lets play it.

that’s what she said, the hilarious party game of twisted innuendos and raucous gameplay where sidesplitting laughter and sip-spitting cocktails is the norm. you may, in fact, wet your pants.

“This game is as dirty as your mind wants it to be!”

wanna know which friend is a super freak? play that’s what she said and learn all your friend’s dirty secrets.

that’s what she said is the perfect game for [adult] family game… but only if you can handle hearing your best friend (or dad) say ridiculously dirty things!!

host the ultimate hen party by bringing that’s what she said—it’s the board game equivalent of spiking the punch.

designed for four or more players, that’s what she said takes 30-60 minutes to play. unlike other party games, all the cards within the game are designed to work together to maximize the evening’s hilarity and minimize those awkward well-that-wasn’t-funny moments. also, after each round, players can discard one card that doesn’t tickle their pickle (that’s what she said!) and redraw to keep their hand funny and fresh. the player known to be the kinkiest of the bunch is the first judge, and starts the game by reading a red setup card to the group, while the remaining players select the most inappropriate card from their hand for consideration. the judge awards the winner the red setup card as a marker, and the first player to collect five saucy setup cards wins.

Our fans are saying:

“A better version of Cards against Humanity”

“We laughed until we cried!”

“Always a hit at any party!”

“Funnier than Cards Against Humanity as there is more innuendos.”

“This game takes funny and inappropriate comments to a whole new level!”

Great for parties! Fast paced and hilarious on every turn—a naughty twist to Cards Against Humanity.
This game is as dirty as your mind wants it to be. Play with different friends for wildly different outcomes!
Take this with you to hen parties, stag dos, girls night in, Christmas parties or birthday parties.
Adapted from the original US version to satisfy your deadpan British humour…Dickens would be proud.

There are no reviews yet.

toyswelike.com  participates in the Amazon Services LLC Associates Program, which is an affiliate advertising program designed to provide a means for websites to earn advertising fees by advertising and linking to amazon.uk